Dr Nadeem Mahomed, right, conducted a virtual interview with Dr Shoaib Ahmed Malik, the author of Islam and Evolution, on May 8, 2022. Malik is Assistant Professor at Zayed University, Dubai, in chemical engineering.

Malik’s monograph demonstrates a splendid respect for knowledge and the process of enquiry, critical analysis and argument, and a deep appreciation for both the Islamic tradition and modern science, writes reviewer NADEEM MAHOMED.

THE matter of evolutionary biology has arguably posed one of the most significant modern challenges to religious traditions, primarily the three Abrahamic faiths: Judaism, Christianity and Islam. The theory of evolution (hereinafter referred to as ‘evolution’) broadly understood seems to undercut, from the perspective of the religious believer, certain foundational creedal principles which relate to the existence of God. It furnishes an alternative history of life and creation on earth which is independent of God’s omnipotent creative potential. Furthermore, it decentres the human subject as unique or endowed with special divine attributes that mirror the perfection of the Divine reality, and renders humankind’s creation – its biological history and development – a consequence of accidents or coincidences of nature without the intervention of any supreme guiding hand.

For most religious believers, it also contentiously symbolises a loss of moral integrity in that evolution allegedly dilutes the need for a moral framework with ultimate accountability before an omniscient lord. This approach to the subject of evolution is understandable from the religious perspective, as it appears that evolution plugs a gap where the idea of God once rested firmly. In an ideological sense, for those whose crusade against religion and theism is fought with the arsenal of modern science, the fewer gaps there are, the narrower the space for God. In the words of that melancholic and unsentimental German philosopher, Friedrich Nietzsche (d. 1900), ‘into every gap they put their delusion, their stopgap, which they called God’. (Thus Spoke Zarathustra, p. 92) Equally, strident religious believers have felt the encroachment of science upon the metaphysical terrain as an unwelcome existential intrusion and threat. 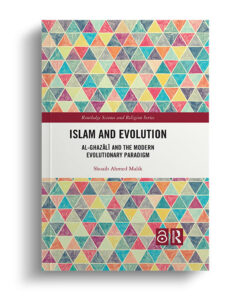 Within the Islamic context, the responses to evolution have been mostly thin and/or unimpressive. The central failure is usually either not fully understanding evolution within the scientific framework or constructing straw arguments that misrepresent the details of evolution. Shoaib Malik’s monograph is a welcome and much needed exception. An admixture of a defence of the scientific enterprise and theodicy, Malik takes seriously both the scientific process and its logical implications for knowledge and our understanding of our world and the religious claims that Islam makes as a religious tradition upon those who accept its worldview. It is beyond the scope of this review to provide a detailed summary of the comprehensive arguments and information set out in the book. However, it is pertinent to set out a brief synopsis of the core of Malik’s exposition as understood by this reviewer. There are three focal claims – supported by critical arguments – that form the lynchpin of the larger structure of Malik’s assessment in respect of the question of whether Islam and evolution are compatible.

First, Malik sets out to explain in clear terms what evolution actually is and what it means. In doing so, Malik disentangles evolution from both popular – and inaccurate – understandings of the theory as well as secular scientism which marshals evolution as a tool in an ideological struggle against religion. This primary but exceedingly important section is necessary reading for anyone who intends to formulate a response to evolution irrespective of whether that response is conciliatory or rejectionist. One popular but insubstantial treatment of evolution is that it is a theory based on flimsy or limited evidence from which scientists hypothesise – or in other words interpret – what they think connects the alleged incomplete evidence trail within an atheistic framework. Malik rejects this common and erroneous position by explaining how the scientific method works:

Science needs facts or data to make claims. Without data, scientists cannot guess what’s going on with the phenomena they are interested in. So once data is acquired, scientists start creating hypotheses. After a hypothesis is further reified through experimentation, scientists begin to develop laws in mathematical form to encapsulate an equation. Once those laws are understood, can be explained, and have been substantially tested, only then does it becomes a scientific theory…A scientific theory is a model that best explains the facts and makes testable predictions. If it continues to align with newly discovered facts and continues to make predictions that come true, it remains a valid theory. In other words, a valid theory is the highest level of substantiation you can get in science. (p. 48)

In short, evolution is the most scientifically persuasive explanation of biological life on earth, which meets the highest standards of proof within the discipline. There is no conspiratorial workings or secular bias that bolsters evolution or provides it with validity and, like any other theory within the discipline, it is open to revision if new data comes to the fore which adequately challenges the current position.

Second, Malik maps out the four Muslim responses to evolution. There is the traditional response which is a complete rejection of evolution is creationism. This entails holding fast to traditional premodern narratives regarding the creation of the universe and life on earth through the lens of intelligent design by an omnipotent God who invests in creation purpose and moral order in a way that does not align with evolution.

A moderated response is the human exceptionalism response, which accepts evolution in respect of non-human life and excludes humans from this picture because it cannot reconcile the narratives of human creation in the Quran and Hadith with evolution. There is the novel and intriguing response that was pioneered by another scholar, David Solomon Jalajel, and is termed Adamic exceptionalism. This proposition suggests that with the exception of Adam and Eve (Hawwa), and their descendants, all life is subject to evolutionary conditions. This response leaves open but is not committed to the possibility of other humans who are the product of evolution. The final response is a ‘no exceptions’ response, which holds evolution to be valid and the need to interpret scriptural sources metaphorically in light of empirical knowledge.

Third, Malik proceeds to answer the central question of the book: if evolution is true or valid, to what extent can it be theologically accommodated in terms of the framework or principles of the Ash’arite school of speculative theology? Here, Malik takes the Ash’arite framework as espoused primarily by the celebrated Abu Hamid al-Ghazali (d. 1111) as the indicator or measure by which to ascertain to what extent or which aspects of evolution can be condoned or accommodated within an Islamic theological worldview. While Malik may privilege the Ash’arite school of thought in this monograph, he does not do so on the basis that other theological schools of thought offer inferior possibilities of accommodation or on the claim that Ash’arite theological creeds are necessarily more true than other theological creeds. Rather this framework is used as one way by which evolution can be assessed theologically within the Islamic tradition while at the same time not foreclosing the possibility of other non-Ash’arite theological responses or assessments to the issue of evolution. Malik provides a cogent, clear and detailed delineation of Ash’arite ontology and metaphysics insofar as it relates to his assessment of evolution. Malik divides this analysis into two sections: metaphysical considerations and hermeneutical considerations.

Two key philosophical features of the Ash’arite position that Malik sets out are occasionalism and atomism. The former construct states that God is the cause of everything and everything relies on God for its existence. The latter construct states all things can be broken down into atomistic units but no further. Malik does not tether atomism definitively to all expressions of the Ash’arite paradigm, and it is also not instrumental to his discussion on evolution. Nonetheless, together, these two constructs guarantee the absolute omnipotence of God and the limitedness of creation over which God has absolute control, always. Malik concludes that all four Muslim responses can be accommodated under the metaphysical considerations. Furthermore, intelligent design is not a necessary requirement for Divine creation and that the potential absence of an objective universal morality is not a problem for the Ash’arite position because God transcends good and evil, and ‘morality is ultimately whatever God wills’. (p. 256)

In respect of the hermeneutical considerations, which are more directly informed by al-Ghazali’s interpretive requirements and strategies, only creationism, human exceptionalism and Adamic exceptionalism can be accommodated theologically within the Ash’arite setting. Malik suggests that the closest alignment is the Adamic exceptionalism response that was developed by Jalajel. As for the ‘no exceptions’ position, this response cannot be maintained in a coherent way in line with al-Ghazali’s hermeneutical framework.

Malik’s monograph is clearly written and wonderfully detailed. It demonstrates a splendid respect for knowledge and the process of enquiry, critical analysis and argument, and a deep appreciation for both the Islamic tradition and modern science. It transcends simple binaries which often characterise the nature of the discussion on Islam and evolution, and for that it is all the more stronger and richer. It is a solid and scholarly contribution to the subject.

The Saudi distortion of dissent in Islam

gender based violence sexual abuse Palestine Shaikh Seraj Sulaiman Nordien Seraj Hendricks Imam Haron NPA Eid-ul-Fitr Steve Biko Sanzaf Stellenbosch University GBV COVID-19 Prophet Muhammad
No Result
View All Result
We use cookies on our website to give you the most relevant experience by remembering your preferences and repeat visits. By clicking “Accept All”, you consent to the use of ALL the cookies. However, you may visit "Cookie Settings" to provide a controlled consent.
Cookie SettingsAccept All
Manage consent