Education for the poorest continues to haunt the present

in Editorial, Featured
Reading Time: 3 mins read
A A

Education has long been a focal point of struggles for justice in South Africa’s past. It remains an arena in which broader social injustices can be observed.

June 16, 1976, for example, is a key date in post-apartheid South Africa’s calendar. Now called ‘Youth Day’, this day of commemoration evokes a range of emotions and memories among those who lived during that period.

The iconic photograph of a dying Hector Pieterson, 12 years old, remains a feature of memory that tears at hearts each time the image is viewed.

The 12-year-old was killed by an adult, carrying out the instruction of the apartheid regime to crush the spirit of any resistance to its evolving plans to bring the education of Black (Black, Coloured and Indian) people under the jackboot of the military regime that ruled South Africa during apartheid.

We recall that the same apartheid police and armies that murdered 12-year-old Hector Pieterson were waging wars of terror against our African neighbours in Zimbabwe, Namibia and beyond, with its reach extending to Zambia as the apartheid regime sought to destroy any support by our frontline states for the resistance armies of the African National Congress, the Pan Africanist Congress, the Azanian Peoples’ Organisation, and others who had taken up the armed struggle against a white minority regime that used the myth of race-thinking to hoard the wealth of the country for a tiny sector of the population.

Part of this war on the peoples of South and Southern Africa by the apartheid regime was the ideological war to control the minds of the oppressed millions.

Marxist scholars have given us the term ‘ideological state apparatus’ to understand how capitalist regimes (and other regimes) use education and the media to control and direct the thoughts of youth and adults into accepting inferiority as something natural or God-given.

This idea, inculcated through years of compulsory schooling, drums home the false idea that success in schools is the outcome of hard work and ability alone.

Societies are led to believe that those who succeed at school do so because they are simply better than other students.

The rewards of such a system are great. School success opens up pathways to university access and financial support. This leads to the achievement of high social respect in the form of admiration for earned degrees in what are called ‘desired’ academic programmes. And this leads, in the main, to career paths that cement and consolidate the position of the wealthy at the top of the social food chain.

The myth here is that the wealthy are the best in society. A false logic is employed. Since the children of the wealthy attend the best schools, they must be the best and most worthy of social success.

The continuing myth is that the majority of the nation’s children, who attend the poorest schools, are there because they are lazy or not interested in education.

June 16, 1976, and the photograph of Hector Pieterson, gives the lie to such false claims made by the wealthy elites.

These economic elites will not admit to the fact that there is a dire need on their part to maintain unequal access to good-quality education for the poor majority in the country.

The economic elites do not write about their well-fed children who live in secure, leafy homes, surrounded by support in all forms.

Poor students simply live in different worlds. Their spaces are cramped, their lives undermined by lack of access to water in their homes, inadequate toilet facilities at schools, and the fear that tomorrow will be another struggle to find sufficient, healthy food to eat.

COVID-19 has laid bare the inequalities that existed way before COVID-19. We have been rudely awakened to the fact that the inequalities in society are experienced in schooling lives that are vastly different for wealthy children than they are for the poor, who make up the majority. 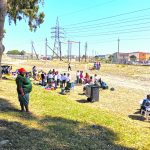 Featured image: Twenty-seven years into democracy and our learners are still the victims of oppression. Children from the newly-developed Western Cape government housing project, Forest Village, in Eerste River, are being schooled in the open by unemployed teachers as no provision was made for a school. Government says that the learners will be transported to schools in Khayelitsha but parents have rejected the idea and, in protest, have organised classes in the open as their children have not been placed in schools. (Photo SUPPLIED)

Islamic perspective on sexual abuse of children and adolescents

‘An unwavering commitment to the cause of freedom’

Aman School of Excellence – a beacon of hope

Shaikh Seraj Stellenbosch University Eid-ul-Adha COVID-19 Steve Biko Sanzaf Imam Abdullah Haron NPA Cassiem Khan Imam Haron Galiema Haron GBV Palestine gender based violence Eid-ul-Fitr
No Result
View All Result
We use cookies on our website to give you the most relevant experience by remembering your preferences and repeat visits. By clicking “Accept All”, you consent to the use of ALL the cookies. However, you may visit "Cookie Settings" to provide a controlled consent.
Cookie SettingsAccept All
Manage consent