in Featured, Lifestyle
Reading Time: 4 mins read
A A

SHAHNAAZ PARUK, the CEO of Penny Appeal SA, reaffirms the organisation’s commitment to the fight against gender-based violence, highlighting the need to include education and reformative work with perpetrators of violence against women.

SOUTH Africa is known to have one of the highest records of violence and sexual assault against women and children.

Domestic violence is very prevalent in most communities, with the latest statistics revealing that an estimated one in three women has faced physical or sexual abuse at the hands of a partner or known family member.

With South Africa just coming out of a strict lockdown to combat the COVID-19 surge, the instances of domestic violence, specifically against women and children, have drastically increased.

Femicide is a growing concern in South Africa, with our president now referring to incidents of violence against women and children as a ‘silent pandemic’.

Femicide has seen a profound increase over recent years, with a few of the contributing causes being summarised to reveal a lack of dire consequences and inadequate legal responses to instances of domestic abuse and violence.

In addition, a clear lack of state-provided interventions and support in relation to these crimes provide a breeding ground for the cycle of femicide and violence against women and children to continue. Substance abuse and alcoholism are noted to be constant factors in the majority of femicide cases, and recent COVID lockdown measures have exacerbated these causes.

In cases of crimes against intimate partners, there has a been a definite correlation of an over-stressed home environment pertaining to financial strain, relationship challenges and frustrating socio-economic or psychological challenges faced by one or both partners.

The sad reality is that the society we live in has allowed the patterns of abuse we see to become engrained in the DNA of our country – largely owing to this norm not being challenged, and insufficient resources spent on changing the behaviour cycle we have come to accept as normal.

A lot more work is needed around advocating for the safety of women and children, and rehabilitation of perpetrators who perpetuate the cycle of abuse and femicide.

Statistics point to men experiencing a much lower rate of being subjected to domestic abuse, with most incidents being found to be extremely rare and almost never fatal.

Penny Appeal South Africa presently supports a women’s shelter in Cape Town (Ihata Shelter for Abused Women and Children) as well as makes provision for the hosting of a domestic abuse hotline.

The hotline provides advice and basic counsel as well as referral services to individuals (male and female) who experience any form of domestic abuse: emotional, physical or sexual.

The shelter serves as a place of refuge and healing for those affected by domestic abuse, and works in collaboration with local authorities for placement and referrals.

Through the support of Penny Appeal South Africa, it is possible for victims of gender-based violence (GBV) to seek assistance and counsel, as well as complete a 90-day programme where they are counselled and provided a safe living space in order for them to plan the next steps of the change in their lives.

This is a crucial time for any survivor, and in order to transform from a victim-driven mindset to one of survival and wellness, there has to be the promotion of unlearning past behaviours and patterns, and welcoming new lifestyle changes and thought patterns.

As Penny Appeal South Africa, we reaffirm the organisation’s commitment to the fight against gender-based violence, and highlight the need to include education and reformative work with perpetrators of violence against women.

It is imperative that law enforcement, civil society and social welfare groups realise that we all have a vital role to play in offering a holistic intervention to promote the option of ease in access to relevant assistance, as well as ensuring that policy and action taken against acts of domestic violence are relevant and have serious consequences.

As Muslims, we should insist on social matters such as these becoming focal points in our quest to restore our family units and re-direct our values compass to ensure that we do more for our women and children to be safer.

This also means realising and accepting that as Muslims, our communities are not exempted from the horrors of domestic violence and child abuse.

A means to recognising this and taking active steps in addressing the matter for solutions cannot be done in a silo – it requires commitment from our religious leaders and communities at large.

The first step is to speak up/ out about it. By doing so, there is a conscious decision to break the cycle of abuse and the perception of being a victim in an ongoing cycle of abuse.

Assistance can be sought in the form of counselling, places of safety and shelter, and in inclusion of family or support structures to enable and foster a positive environment which will encourage victims to break the cycle.

An area that has not been explored is the option to work with the perpetrator of domestic violence, and work towards promoting a change in approach and mindset so that the interventions taken are not one-sided and reactive to address the victim/ survivor’s stance but that of the perpetrator, too.

Penny Appeal continues to advocate for the rights, safeguarding and protection of women, children and vulnerable children.

Our efforts continue in supporting projects which speak to the development and upliftment of women, and advocate for a society where values are once again renewed as the primary source of healthy communities and families.

In addition, we work in areas of orphans and vulnerable children, water, hygiene and sanitation, and education initiatives.

To find out more about our work, and work on female empowerment and gender-based violence throughout the year, contact info@pennyappeal.org.za.

This article was first published in the December 2020 print edition of Muslim Views. 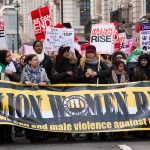 Featured image: The Million Women Rise protest march through the streets of central London, creating awareness to bring about an end to male violence against women in all its forms. The writer argues that the first step towards addressing the ‘silent war in South Africa’ is to speak up about it. (John Gomez / Shutterstock.com)

Sexual abuse of children in the Muslim community

School honours teacher who led from the front

‘An unwavering commitment to the cause of freedom’

Aman School of Excellence – a beacon of hope

School honours teacher who led from the front

Eid-ul-Adha Steve Biko Shaikh Seraj Galiema Haron Stellenbosch University COVID-19 Cassiem Khan Palestine Imam Abdullah Haron gender based violence GBV Eid-ul-Fitr Sanzaf NPA Imam Haron
No Result
View All Result
We use cookies on our website to give you the most relevant experience by remembering your preferences and repeat visits. By clicking “Accept All”, you consent to the use of ALL the cookies. However, you may visit "Cookie Settings" to provide a controlled consent.
Cookie SettingsAccept All
Manage consent