in Featured, Living Islam
Reading Time: 5 mins read
A A

In this third and final part of the series on the Master’s thesis of the late Shaikh Seraj Hendricks, DR AUWAIS RAFUDEEN looks at the practice of tasawwuf during the era of Tuan Guru.

THE era of Tuan Guru marks a definite break with what went before. Until then, Islam was almost furtive and private.

The late eighteenth century was marked by more tolerance of public Islamic practice, and Tuan Guru took advantage of this greater freedom to set up South Africa’s first mosque and Islamic educational establishment.

However, Shaikh Seraj is careful to show that this institutionalisation of Islam must not be equated – as some scholars do – with a new ‘shariah’ orientation as distinct from a supposedly previous ‘tariqah’ orientation.

Within tasawwuf, both are necessarily combined. Institutionalisation does not mean ‘more shariah’. In fact, necessary and natural as it was, it can and did bring its own problems during the course of the 19th century.

Tuan Guru continued to cultivate the tasawwuf ethos set in motion by the earlier shaikhs. The tuan himself, as Shaikh Seraj shows, was clearly linked to the Ba-Alawi tradition and was most likely a shaikh in that order.

While known for institutionalising aqeedah and fiqh studies in the Cape milieu through both writing and teaching, it is the tuan’s considerable devotional-pietistic material (litanies, supplications, etc.) where his tasawwuf is lodged.

And this devotional material is possibly more significant than his legal-theological legacy since it is through the ritual recital of that material that religious truths are made a heartfelt, lived reality.

Tuan Guru was not alone. Tasawwuf around this period was further bolstered by the activities of Tuan Said Alawi, Paay Schaapie and Tuan Abdul Malik. These three shaikhs were also possibly emblematic of certain more itinerant – but crucial strands – within the broader discipline of tasawwuf.

These strands include the path of blame (the malamati – where the Sufi seemingly appears blameworthy but is, in fact, in service of a higher cause) and the way of the repentant (tawwabun – where a particular service is regularly performed as an act of penance for what has gone before).

With the passing on of the last of these shaikhs, Tuan Abdul Malik, in 1833, tasawwuf proper in the Cape appears to enter a waning phase. This, no doubt, coincided with the internecine mosque and other conflicts that were to be the bane of the Cape Muslim community for much of the 19th century.

According to Shaikh Seraj, it is highly likely that tasawwuf in this period – while using Tuan Guru’s teachings as a base – left the mosques and retreated into langgars (prayer rooms) and home based madrasahs since ‘Islamic spirituality has a tendency to withdraw from such conflicts’.

This was coupled to the fact that there was a continuing reluctance among the shaikhs to grant ijazah irshad, implying that, apart from a few, there was a lack of spiritual heirs to take up the tariqah cudgels.

Yet, the foundations laid by the shaikhs sustained the community through this difficult period. Mouloods and rampiesny in the 19th century certainly served as communal get-togethers, where the conflicts could be overcome and differences healed.

The arwaahs, dhikrs, Ratibul Haddads and visits to shrines helped establish spiritual continuity between the living and the deceased, and reminded people of the primordial purity of the soul over temporal existence, certainly putting those conflicts in broader perspective.

An interesting feature of the late 19th century was the debate around the practice of ‘ratiep’, with the issue dividing the Cape Muslim community.

Eventually, a compromise was reached whereby the practice would be confined to a certain time of the year.

To provide perspective on the practice, Shaikh Seraj draws a distinction between tasawwuf (spirituality) – this being a connection to the sacred – and mujarrabat (spiritualism) – the goal of which is to harness extra-sensory forces.

Shaikh Seraj was firmly of the view that ratiep falls within the realm of mujarrabat.

In fact, he classed the second half of the 19th century as the century of the mujarrabat due to a weakened epistemological base (again, the lack of ijazah irshad means the lack of properly qualified imams).

The strong earlier tradition of tasawwuf retreated to the margins and was substituted by a focus on mujarrabat practices. These practices also experienced a degeneration of sorts – the ratiep at times was more exhibitionist than anything else.

Still, mujarrabat does speak to a spiritual reality and its practitioners felt that reality. It is also a reality that made the colonists uncomfortable: how does one explain the seemingly contravention of nature’s laws that takes place in the ratiep?

Further, in the context of colonial subjugation, the ratiep also acted as a force for the politically subjugated to re-assert control over their own bodies.

From the late 19th to the mid-20th century, tasawwuf once again was brought to the centre of Cape Islam. We may even trace these developments to Shaikh Abubakr Effendi who, while not known as a Sufi, certainly taught the practical ethics of tasawwuf, as well as a Sufi-based tafsir, in the school he established.

But tasawwuf in this period received its real impetus from figures such as Moulana Abdul Latif Qadi, the founder of the Habibia complex in Athlone; the Hadrami Qadiri shaikh, Sayyid Muhsin bin Salim al-Aydurus; the prolific Shaikh Abdul Rahim Iraqi, originally from Makkah; the great da’ee and Qadiri shaikh, Moulana Abdul Aleem Siddiqi; son of the grand-shaikh of the Rifai order, Sayyid Mansur al Rifai; and, Shaikh Seraj’s own grandfather, Shaikh Muhammad Salih Hendricks, the founder of the Azzavia complex and shaikh in the tradition of ‘tariqa ulama Makka’ – the Sufi path of the Makkan sages, which is deeply connected to the folk of the Idrisis, the Shadhilis, the Ba-Alawis, the Qadiris and others.

(Shaikh Seraj, along with his brother, Shaikh Ahmad Hendricks, and his student, Shaikh Dr Hisham A Hellyer, co-wrote a book on that tariqah titled A Sublime Way, published by Dar al-Turath al-Islami in 2018.)

These shaikhs were jointly responsible for the flowering of tariqah-based tasawwuf in Cape Town as well as the broader entrenchment of the tasawwuf ethos that characterised the Cape milieu.

While not the focus of his study, Shaikh Seraj observes that, post-1945, tasawwuf has come under the increasing strain of the puritanical assault.

Globalisation has meant the influx of new ideas and a new breed of scholarship to perpetuate those ideas.

But this works two ways: while the puritans have, no doubt, dampened the tasawwuf ethos in the Cape, particularly in the 1970s and the 1980s (although there were significant counters to this even in that period), that ethos is currently experiencing a revival.

Overseas, Naqshbandi, Shadhili and Tijani networks have undoubtedly help shore up, consolidate and proliferate that ethos.

Given the history sketched by Shaikh Seraj, the impact of these shaikhs is not to break new ground for tasawwuf in the Cape but to tap into a tradition that is already a profound part of the Cape Muslim psyche.

Shaikh Seraj was a representative of that tradition par excellence.

He offered a penetrating study of tasawwuf at the Cape because he lived this tradition.

The essence of this tradition of tasawwuf is well captured by Ahmad Deeb in one of the many glowing tributes paid to Shaikh Seraj.

Deeb writes in this way about the fundamental lesson taught to him by Shaikh Seraj, and which now sustains his own approach to the world as a Muslim religious leader in America: ‘Our focus is to navigate this imperfect world through unfailing commitment to transcendental, timeless principles, and helping others do so with kindness and compassion.’

This article was first published in the November 2020 print edition of Muslim Views. 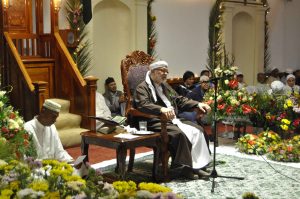 gender based violence Seraj Hendricks Sanzaf Stellenbosch University Sulaiman Nordien Prophet Muhammad Palestine GBV COVID-19 Steve Biko Imam Haron Eid-ul-Fitr sexual abuse Shaikh Seraj NPA
No Result
View All Result
We use cookies on our website to give you the most relevant experience by remembering your preferences and repeat visits. By clicking “Accept All”, you consent to the use of ALL the cookies. However, you may visit "Cookie Settings" to provide a controlled consent.
Cookie SettingsAccept All
Manage consent