in Living Islam
Reading Time: 6 mins read
A A

In this second part of the series on the Master’s thesis of the late Shaikh Seraj Hendricks, DR AUWAIS RAFUDEEN analyses the shaikh’s account of the history of tasawwuf at the Cape. (Click here for part one)

SHAIKH Seraj starts by providing an overview of the background and principles of those Sufi tariqahs that had a significant impact on the Cape Muslim landscape, namely, the Qadiri, Suharwardi, Khalwati, Rifai, Chisti, Shadhili, Ba-Alawi and Naqshbandi tariqahs.

Among the noteworthy aspects which emerge in his description of these orders is that the Khalwati tariqah (the order of Shaikh Yusuf) has a sub-branch, the Sammaniya. It is this sub-branch which is the source of the well-known Samman dhikr in Cape Town.

He also shows interesting connections between the Ba-Alawi and the Shadhili tariqahs, in that the former, whose influence tends to be underrated because of their deliberately cultivated indistinctiveness, actually follows the spiritual methodology of the latter.

Shaikh Seraj quotes Sayyid Ahmad ibn Abu Bakr Sumayt who says: ‘The outer teachings of them (the tariqah of the Ba-Alawis) are based on the knowledge and practical principles as expounded through the wise guidance of Imam Ghazali and the inner teachings are based on the realisation of the spiritual realities and the purification of Tawhid as expounded by the Shadhiliyyah…’

The direct historical origins of Islam at the Cape are, of course, found in the Malay/ Indonesian archipelago. The character of Islam in the Archipelago was, in turn, significantly shaped by the nature of Islam in Hadramawt, Yemen.

Here Shaikh Seraj agrees with Naquib al-Attas, that the Arabic language and Islamic culture of Hadramawt was channelled into an Islamised Malay language which, in turn, shaped the literature, thought and culture of the archipelago with a distinctive South Arabian stamp.

This, together with the impact of Arab missionaries, trade links with South Arabia and the fact that South Arabia had also impacted on Islam in Kerala, India (another influence on Islam in the archipelago), shows that the ‘dominant influences [for Islam in that region] were Arabian, and particularly South Arabian, in origin’.

If we recall that Hadramawt is the spiritual centre of the Ba-Alawi tariqah, and plays a critical role in shaping the character of Islam there, then the importance of the tariqah’s influence in the archipelago, and by extension in the Cape, is significantly magnified.

And there is no doubt that from the 15th to the 18th centuries, via this tariqah and others, Islam in the archipelago was suffused with Sufism and this is how it reached the Cape.

In addition, the Ba-Alawi order also penetrated India, East Africa, Madagascar and Comores: slaves from the Cape were sourced from all these areas and, undoubtedly, brought those influences here to some degree or other.

The hallmarks of Hadrami Islam, namely immersion in tasawwuf and adherence to the Shaafi’i madhhab, become embedded features of Islam at the Cape.

The first known Sufis to have arrived here are the Orang Cayen (men of stature) in 1667, namely, Tuan Mahmud al Qadiri, Tuan Abdul Rahman Matebe Shah and an unknown third. They were, in all likelihood, Qadiri shaikhs, and there is evidence to suggest that the Qadiri order in Cape Town traces its roots to that period.

Among the evidence in this regard are certain Qadiri forms of dhikr characteristic of the Cape milieu as well as the historical popularity in that milieu of the following supplication by Shaikh Sayyid Abdul Qadir al-Jilani:

‘O Allah! To You belong all praise as an expression of gratitude, and all favours as an overflowing blessing, and through Your grace righteousness is secured. We ask You, O Allah, a quick relief from all anxiety, for indeed You never cease to be near.

‘(We ask You, too) for strength of courtesy in forbearance, for protection during all times of tribulations and for safety from all forms of calamity. O Allah, bind our gathering with the bonds of mercy, and when we depart, let us depart with our honour and virtue protected.

‘Cause not a single one of us to suffer misery and deprivation, and do not abandon us to anyone other than You, nor deny us the vastness of Your grace.’ (As quoted by Shaikh Seraj)

Shaikh Seraj then traces the history of the majestic Shaikh Yusuf from his birth in Sulawesi, to his education and travels in the Middle East, to his teaching in Java, to the conflict with the Dutch and the resulting exile of the shaikh, first to Ceylon, and then to the Cape, in 1694.

However, the description goes beyond an exciting narrative. Shaikh Seraj, drawing from the texture of tasawwuf, is effectively able to show that his journey and travails should be viewed in the light of four concepts: sabr (patient perseverance), qada (recognition of the decree of the Almighty), duah (beseeching the Almighty) and adab (proper courtesy to Him).

Beseeching the Almighty for protection and patient perseverance in the face of what He has decreed shows proper courtesy towards Allah.

Far from fatalism, this is an active and almost joyous engagement with the Divine decree, realising its higher purposes, conscious that it is a test, perceiving that constant struggle and activity is also part of the Divine decree, and knowing that, ultimately, all is to return to Allah and to their real abodes.

It is telling that Shaikh Yusuf was a firm follower of the ‘Wahdatul Wujud’ (Oneness of Existence) school, associated with the great Andalusian Sufi, Shayk Muhiyudin ibn Arabi.

In ‘Wahdatul Wujud’ there is a realisation that while Allah transcends the world, the world manifests His existence, power and attributes. A person sees Allah in all things. This state is only realised after purification of the self, which, in turn, is premised primarily on the practice of dhikr.

Of course, Wahdatul Wujud is not the only path that brings one to this realisation, and it does appear that its apparent difference with some other schools, such as the Wahdatul Shuhud, may be largely a question of terminology.

The realities arrived at are the same. Yet, Shaikh ibn Arabi, because of the difficulty of his work, has sometimes been misinterpreted and misunderstood as one who stands in conflict with the shariah. This is, needless to say, far from the case.

Aside from Shaikh ibn Arabi’s well-known and profound expertise in the shariah, the fact that great ulama, like Shaikh Yusuf and many others – the very guardians of the shariah among their own constituencies – have taken the shaikh as a principal spiritual guide, is sufficient to dispel any suspicion regarding the orthodoxy of Wahdatul Wujud.

More generally, the whole trajectory of Shaikh Yusuf’s life effectively dispels the prejudiced perception that ‘otherworldly’ Sufis do not engage in the cut and thrust of the world.

Did Shaikh Yusuf establish a legacy for his tariqah at the Cape?

Shaikh Seraj does not believe that this was the case. The social conditions at that time simply did not allow a full flourishing of the ijazah irshad system (a full investiture to guide others along the path) that is so essential to the perpetuation of tariqah.

The system requires that disciples be trained in a comprehensive way for an extended period of time before being granted permission to teach – a harsh colonial context simply did not make this possible. Yet, Shaikh Yusuf’s considerable imprint on Islam at the Cape is unmistakeable.

This imprint was felt via the litanies, devotional practices, basic legal and theological teachings, as well as practical ethics that appear to be Shaikh Yusuf’s legacy to that community.

Shaikh Seraj makes some informed speculations about the ‘Sufis of the Forest’ – those Sufis whose shrines dot the mountainsides of Cape Town – despite the difficulty of locating substantial evidence regarding their lives (except, perhaps, with the case of the tuans buried in Simonstown, where their families still possess documentary evidence).

He agrees with Adiel Bradlow that the influence of such Sufis on Cape Islam was considerable and that they were vital conduits in spreading and perpetuating Islam at the Cape – and at that time, Cape Islam simply meant ‘Tasawwuf’.

However, the role of these shaikhs was again not in the perpetuation of the tariqah disciplines (of which there is little evidence) but as conduits for practical ethics, maxims, Islamic teachings and, vitally, the litanies that characterise Cape Islam. In this way, they appear to have continued Shaikh Yusuf’s legacy.

In the third part we look at the practice of tasawwuf during the era of Tuan Guru.

This article first appeared in the October 2020 print edition of Muslim Views. 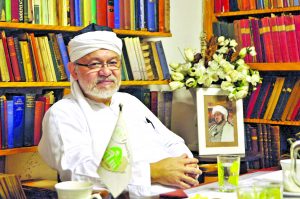 Perspectives on physical and mental health during Ramadaan

Standing in solidarity with Dr Sizer

The place of Cape Town in a burning South Africa

Cassiem Khan Eid-ul-Adha Palestine Imam Abdullah Haron GBV Imam Haron Sanzaf Steve Biko COVID-19 Shaikh Seraj NPA Eid-ul-Fitr Galiema Haron gender based violence Stellenbosch University
No Result
View All Result
We use cookies on our website to give you the most relevant experience by remembering your preferences and repeat visits. By clicking “Accept All”, you consent to the use of ALL the cookies. However, you may visit "Cookie Settings" to provide a controlled consent.
Cookie SettingsAccept All
Manage consent