in Living Islam
Reading Time: 6 mins read
A A

This is the first part of a series by DR AUWAIS RAFUDEEN analysing the Master’s thesis of the late Shaikh Seraj Hendricks.

Part 1: Shaikh Seraj on how to think about tasawwuf at the Cape

SHAIKH Seraj Hendricks’s dissertation, Tasawwuf: its role and impact on the culture of Cape Islam, is a profound meditation on how this field, described as the very essence of Islam, unfolded and manifested itself at the Cape.

The period covered by his study stretches from the very emergence of Islam in that region to the year 1945. In doing so, Shaikh Seraj provides a penetrating examination of what has been written in the area so far, illuminating many aspects, otherwise obscured, by dint of his considerable training in the Islamic disciplines.

A word on this training is necessary since it helps explain the significance of the learning that Shaikh Seraj brings to his subject matter. He, along with his brother, Shaikh Ahmad Hendricks, pursued intensive, formal studies in Islam for at least eighteen years.

Seven of these years were spent studying at the feet of their illustrious uncles at the Azzavia mosque, and a further ten in Makkah, where they completed not only the demanding Ummul Qurra University programme but also the rigorous curriculum of the renowned scholar of Makkah, Sayyid Muhammad ibn Alawi ibn Abbas al Maliki.

In this, they followed a family tradition as their forbears had similarly drunk from the immense scholarly and spiritual fountains of Sayyid Muhammad’s forbears. Moreover, their training did not only cover one disciple or one set of disciplines but all the key areas that a well-rounded, classically trained scholar ought to know.

(And this is crucial since a particular scholar may be quite skilled in one area, such as fiqh, but be radically deficient in another, such as tasawwuf – a problem that, unfortunately, appears to be all too common nowadays.) And this training is apart from the ‘secular’ tertiary studies that they both successfully pursued.

Shaikh Seraj states that what moved him to study tasawwuf at the Cape was his family legacy as well as the scholarly works in the area by Achmat Davids, Adil Bradlow, Yusuf da Costa and Suleman Dangor.

It was, in particular, the latter’s translation of Shaikh Yusuf’s Zubdatul Asrar – The Essence of Secrets – that transformed his perceptions. Zubdatul Asrar was firmly lodged in the ibn Arabian perspective – one with which Shaikh Seraj was already acquainted – and this spurred a desire to study the legacy of Shaikh Yusuf beyond his well-known image as political exile and freedom fighter.

An attention to texts is, in fact, central to his broader project. This attention allows him to get under the skin of the subject he is studying, to really get to the heart of why the subject thinks and acts in the way he does.

Shaikh Yusuf’s commitment to fighting the Dutch incursion into his homeland cannot be divorced from his commitment to the seemingly abstract and esoteric philosophy of Shaikh Muhiyudin ibn Arabi.

On the contrary, the intensity of his jihad correlates with his immersion in the higher realms of tasawwuf and the perfect respect that all tasawwuf accords to the requirements of the shariah.

The focus on texts is also indicative of Shaikh Seraj’s concern with the ‘texture’ of tasawwuf: the way it impacts in an existential way on the life of the spiritual traveller. Tasawwuf is, after all, individual: it is the human response to the sacred, navigated through the prism of Islam.

And in this regard, Shaikh Seraj finds the phenomenological approach of Friederich Heiler conducive to his project.

It is Heiler who ‘tries to enter into the heart of religion by studying first the phenomena and then deeper and deeper layers of human responses to the Divine until he reaches the innermost sacred core of each religion, the centre, the Numinous’.

Yet, tasawwuf in Cape Town is also located in a firm history, and took on a myriad of hues in its unfolding through the years.

We cannot simply confine ourselves to the meanings of individual spiritual experiences but need to locate those experiences against an objective backdrop, one provided by the normative Islamic tradition and the trajectory of Cape Muslim history.

This will also circumvent the issue of solipsism (the view or theory that the self is all that can be known to exist) and ensure that those experiences are open to evaluation in the light of that tradition and history.

It is this combination of keen historical sense, penetrative and empathetic understanding of individual spiritual experience and profound insight into the normative Islamic tradition that is characteristic of Shaikh Seraj’s work as a whole.

A thorough understanding of normative Islam makes imperative the reconceptualisation of categories used by social scientists to study the impact of tasawwuf in Muslim society.

He believes that these categories reduce Islam to behaviour and readable gesture, without seeking to hear why Muslims do what they do.

They do not penetrate beneath the surface in order to unearth the texture of people’s spiritual experiences.

Moreover, the practitioners of tasawwuf do not understand themselves in these terms, and any meaningful insight into the phenomenon must take their own self-understanding into account.

A clue to this understanding is the statement of Marshall Hodgson as quoted by Shaikh Seraj: ‘Always the ground of mystical life in this historical sense, is a striving for clarity and sincerity; whatever the level is they have reached, mystics, both Sufis and others, have spoken persistently in metaphors of Light and Truth. To this sort of clarity, the touchstone of relevance to everyday life will apply.’

In this regard, he also takes to task those who wish to manufacture a tension between shariah on the one hand and tasawwuf on the other.

This is a tension generated by a puritanical trend within Islam. It ignores both history and the complexity of Islamic law on issues like bid’ah, where shariah clearly validates the vast majority of popular religious practices associated with tasawwuf. These popular religious practices, in turn, are more than just a social or psychological reflex; they are responses to the Ultimately Real, that infinity that transcends the finitude of the human condition.

Sufis respond to the centrality of the Numinous while cognizant of their responsibility to the shariah at all times. And so someone like Shaikh ibn Arabi could apply the principle of al-adah al-Muhakkamah (customary usages legislated by the shariah) in the light of this Numinous, leading to a flexible and wide-ranging application of this principle.

And it is here that the popular tasawwuf practices of the Cape needs to be located: not as something that operated at the margins of the law but something that flows in full fashion from that shariah in order to help actuate the very goal of existence itself, namely, reaching Allah.

Shaikh Seraj makes the critical observation: ‘It is precisely at this level – a sensitivity to the numinousness as ‘responsiveness’ – that we discern the contours of tasawwuf in Cape Muslim culture.’

There are also those who seek to locate the roots and perspectives of tasawwuf in other religions or mystical traditions. While Shaikh Seraj believes that a comparative study of mystical texts has benefits, it fundamentally misses the point.

Such comparison ‘has little or nothing to do with the way ordinary Muslims, or for that matter, ordinary Jews and Christians, read their texts.

‘While it may be true that an inter-textual study of comparative mysticism will inevitably generate its own and possibly different sets of meaning and value…it is equally true that a devotional reading of those same texts will render a completely different set of meanings and value.’

Here again, Shaikh Seraj’s concern with texture, with how the Sufi himself or herself experiences the path, comes to the fore.

Another misreading that he seeks to correct is the sequentialist discourse on tasawwuf. In this discourse, tasawwuf is seen as moving from one stage to another in history, from asceticism, then to love and then to gnosis etc.

But, of course, this is far from the reality of tasawwuf.

Within the individual spiritual journey, no matter what the historical era, all these aspects are to be found.

However, Shaikh Seraj does find helpful Osman Bakar’s distinction between tasawwuf as historical unfolding and tasawwuf as individual experience.

In the former, the intellectual exposition of its doctrines and methods has creatively interacted and adapted itself to the needs and demands of a historical period without eroding the primacy and multi-faceted nature of individual experience.

Having made these critical reconceptualisations, the stage is now set for exploring the trajectory of tasawwuf in Cape Muslim history, which will be covered in part two. 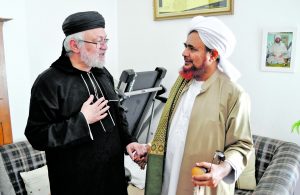 This article first appeared in the September 2020 print edition of Muslim Views.

Gender-based violence solutions from the Quran and Sunnah

In celebration of the reflection of beauty

Rahma: The raison d’être of the Prophet Muhammad’s message and mission

The origin of chemical elements in stars – a Quranic account

In celebration of the reflection of beauty

GBV Galiema Haron Eid-ul-Fitr Palestine Cassiem Khan Imam Abdullah Haron Imam Haron NPA Stellenbosch University Steve Biko Eid-ul-Adha Shaikh Seraj COVID-19 gender based violence Sanzaf
No Result
View All Result
We use cookies on our website to give you the most relevant experience by remembering your preferences and repeat visits. By clicking “Accept All”, you consent to the use of ALL the cookies. However, you may visit "Cookie Settings" to provide a controlled consent.
Cookie SettingsAccept All
Manage consent